The Astonishing Life of Octavian Nothing, Traitor to the Nation; Vol. 1: The Pox Party 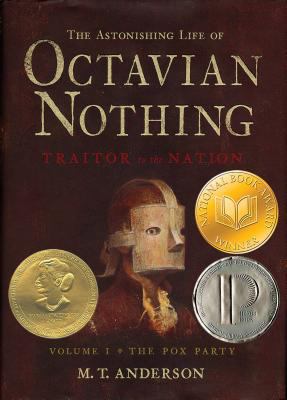 The Astonishing Life of Octavian Nothing, Traitor to the Nation; Vol. 1: The Pox Party by M.T. Anderson

Various diaries, letters, and other manuscripts chronicle the experiences of Octavian, a young African American, from birth to age sixteen, as he is brought up as part of a science experiment in the years leading up to and during the Revolutionary War. It sounds like a fairy tale. He is a boy dressed in silks and white wigs and given the finest of classical educations. Raised by a group of rational philosophers known only by numbers, the boy and his mother - a princess in exile from a faraway land - are the only persons in their household assigned names. As the boy's regal mother, Cassiopeia, entertains the house scholars with her beauty and wit, young Octavian begins to question the purpose behind his guardians' fanatical studies. Only after he dares to open a forbidden door does he learn the hideous nature of their experiments - and his own chilling role in them. Set against the disquiet of Revolutionary Boston, M. T. Anderson's extraordinary novel takes place at a time when American Patriots rioted and battled to win liberty while African slaves were entreated to risk their lives for a freedom they would never claim. The first of two parts, this deeply provocative novel reimagines the past as an eerie place that has startling resonance for readers today.