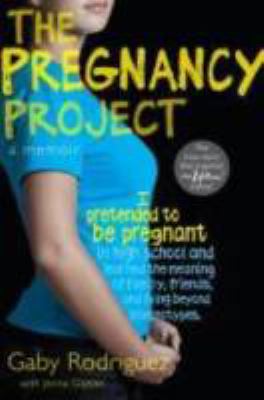 The Pregnancy Project by Gaby Rodriguez with Jenna Glatzer


The true story of a high school senior whose faked pregnancy rocked her community and made international headlines. Growing up, Gaby Rodriguez was often told she would end up a teen mom. After all, her mother and her older sisters had gotten pregnant as teenagers...from an outsider's perspective, it was practically a family tradition. Gaby had ambitions that didn't include teen motherhood. But she wondered: How would she be treated if she "lived down" to others' expectations? Would everyone ignore the years she put into being a good student and see her as just another pregnant teen statistic with no future? These questions sparked Gaby's school project: faking her own pregnancy as a high school senior to see how her family, friends, and community would react. What she learned changed her life forever, and made international headlines in the process.In The Pregnancy Project, Gaby details how she was able to fake her own pregnancy--hiding the truth from even her siblings and boyfriend's parents--and what it was like to become an accidental overnight media sensation, trying to navigate a new world of film and book offers and talk show invitations while getting ready for the prom. But more than that, Gaby's story is about the power of stereotypes, and how one girl found the strength to come out from the shadow of low expectations to forge a bright future for herself.