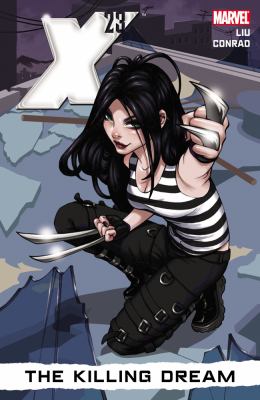 Government-controlled killing machine. Child of the streets. X-Man. X-23 has lived many lives, but none of them have ever felt right. She knows she's a killer, but she's not sure she can be anything else. The X-Men offer her a home and help facing her demons, but she's done being someone's project. She wants to be her own woman, and she'll do it on her own terms. Leaving the X-Men's island home of Utopia on a mission all her own, she's already found trouble. Even with the mutant thief Gambit at her side, her past haunts her. With new enemies rising, can X-23 trust herself not to succumb to her deadly ways? Or is it all just in her head? Free of her chains, can this killer finally taste true freedom? - from the publisher

March 20, 2019
Give Back to Your Community &  Get Valuable Job Experience!

Miko casts a spell to contain the powers of the sexy demon Kagura, who feeds off the passion of women, but while her spell is effective in keeping Kagura from other girls, his lust becomes directed exclusively toward Miko.

July 30, 2019
Most Visalia teens are going back to school in mid-August. Our teen programming is on the light side this month, but it certainly won't stay that way! We will  be offering our Lunch at the Library program which is for kids and teens 1-18 until August 9th. Please look forward to the return of our monthly Teen Advisory Group meetings, which return September 7th at 3pm. Virtual Reality returns September 20th at 4pm and please look forward to the return of Teen painting workshops, dates/times TBD!