Boying Up: How to Be Brave, Bold and Brilliant, by Mayim Bialik


Mayim Bialik, star of The Big Bang Theory and author of the #1 bestseller Girling Up, puts her Ph.D. to work to talk to teen boys about the science and pressures of growing up male in today's world. A must-have book for all teenage boys! 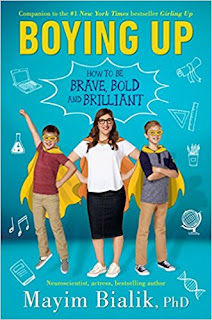 Why does my voice crack like that? What should I eat to build muscle? How do I talk to someone I have a crush on? What do I do if someone calls me names or bullies me?

Growing from a boy to a man is no easy task. Bodies are changing, social circles are evolving, hair is appearing in places it never was before -- and on top of it all, there's the ever-present pressure to conform to the typical idea of what it means to be "manly" and masculine. But it's easier to do if you're armed with facts.

Using personal anecdotes as an overly observant mother of two boys and plenty of scientific information from her life as a neuroscientist, Mayim Bialik, PhD, star of The Big Bang Theory, talks directly to teen boys about what it means to grow from a boy to a man biologically, psychologically, and sociologically. Using the same cool, fun, and friendly tone that she took in Girling Up, Mayim takes boys--and their parents!--through the challenges and triumphs of Boying Up today.

In six sections (How Boys Bodies Work; How Boys Grow; How Boys Learn; How Boys Cope; How Boys Love; and How Boys Make a Difference), she takes a look at what it means for boys to come of age in today's world, how can they take control of their paths, and what can they do to help shape the types of futures they want for themselves.

"A matter-of-fact mirror that reflects reality and respect, not bewildered embarrassment." --Kirkus Reviews
Mayim Bialik is best known as Amy Farrah Fowler on America's #1 comedy, The Big Bang Theory, a role for which she has received four Emmy nominations and a Critics' Choice Award. She also starred in the early-1990s sitcom Blossom. Mayim earned a BS from UCLA in Neuroscience and Hebrew and Jewish studies, and went on to earn a Ph.D. from UCLA in Neuroscience.