Fed up with her wild behavior, sixteen-year-old Lex’s parents ship her off to upstate New York to live with her Uncle Mort for the summer, hoping that a few months of dirty farm work will whip her back into shape. 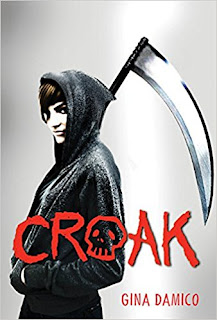 But Uncle Mort’s true occupation is much dirtier than shoveling manure. He’s a Grim Reaper. And he’s going to teach Lex the family business.
She quickly assimilates into the peculiar world of Croak, a town populated by reapers who deliver souls from this life to the next. But Lex can’t stop her desire for justice—or is it vengeance?—whenever she encounters a murder victim, craving to stop the attackers before they can strike again. Will she ditch Croak and go rogue with her reaper skills?

"Go ahead and die laughing, knowing that the safe transport of your mortal soul will be the summer job of a sweetheart teen with godlike power and discipline problems. A lot of books make me wish I could live within their pages, but I wouldn't mind dying in this one."
—Adam Rex, author of Fat Vampire