It's been happening since Min was eight. Every two years, on her birthday, a strange man finds her and murders her in cold blood. But hours later, she wakes up in a clearing just outside her tiny Idaho hometown—alone, unhurt, and with all evidence of the horrifying crime erased. 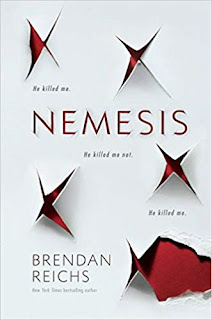 Across the valley, Noah just wants to be like everyone else. But he’s not. Nightmares of murder and death plague him, though he does his best to hide the signs. But when the world around him begins to spiral toward panic and destruction, Noah discovers that people have been lying to him his whole life. Everything changes in an eye blink.

For the planet has a bigger problem. The Anvil, an enormous asteroid threatening all life on Earth, leaves little room for two troubled teens. Yet on her sixteenth birthday, as she cowers in her bedroom, hoping not to die for the fifth time, Min has had enough. She vows to discover what is happening in Fire Lake and uncovers a lifetime of lies: a vast conspiracy involving the sixty-four students of her sophomore class, one that may be even more sinister than the murders.


★ "Min is not your average 16-year-old. Every two years on her birthday, she's murdered. And every two years she comes back, completely unharmed. She's tried to escape the inevitable but knows it's only a matter of time before the man in black returns for her. Now things are getting worse, with an asteroid headed toward Earth. . . [j]ust when she's found that classmate Noah is having the same strange experiences she's tried to keep hidden. . . . Hooked readers will be tapping their fingers waiting for the sequel."—Kirkus Reviews, starred review

★ "There are many overworked adjectives for action books: page-turner, fast-paced, intense. For this book, multiply all of them. Reichs truly keeps readers guessing throughout, with twists on early every page."—Booklist, starred review

"Min is a self-assured female protagonist, and Noah is a refreshingly complex young man . . . [t]his fast-paced exploration of the teen condition is recommended for lovers of science fiction, video games, and New Age dystopia."—School Library Journal