Blue skies. Green grass. Clear ocean water. An island paradise like the ones that existed before the Melt. 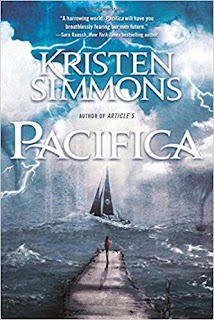 A lucky five hundred lottery winners will be the first to go, the first to leave their polluted, dilapidated homes behind and start a new life. It sounds perfect. Like a dream.


The only problem? Marin Carey spent her childhood on those seas and knows there’s no island paradise out there. She’s corsario royalty, a pirate like her father and his father before him, and she knows a con when she sees one. So where are the First Five Hundred really going?

"Like The Handmaid's Tale, Simmons's book serves as essential commentary on women's rights."―Cosmopolitan.com on The Glass Arrow


“Simmons excels at dystopian fiction, and her admirable latest takes to the sea. …A breathtaking story full of high-seas adventure, power struggles, romance, betrayal, and more... Simmons’ great-grandmother was taken to a Japanese internment camp during WWII, and her experiences influence those of Marin and the pirates. ...Non-stop action and surprises will keep readers enthralled through both rough waters and smooth sailing alike.”―Booklist, starred