Questions I Want to Ask You, by Michelle Falkoff


Patrick “Pack” Walsh may not know where he’s going in life, but he’s happy where he is. 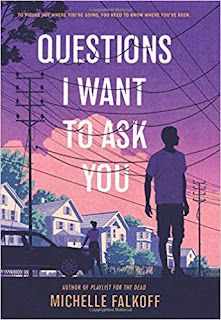 He’s got a job lined up for himself after graduation. A great girlfriend. And can’t really see himself ever leaving his small town. Then, on his eighteenth birthday, a letter from his mother changes everything. Because she’s dead. At least, that’s what he always believed.


As Pack begins a journey to uncover the truth about the parents he thought he knew, the family he didn’t know he had, and the future he never realized he wanted, he starts to have a whole different understanding of his life—and where he wants to go from here.


Questions I Want to Ask You is a contemporary realistic coming-of-age story with an emotionally-driven mystery at its core.

“A well-rounded, much-needed portrait of a boy with self-image issues and a narrow mindset who expands his viewpoint and prepares for an uncertain future.” (Kirkus Reviews)

“Falkoff’s coming-of-age story leaves the reader feeling proud of Pack’s personal evolution and ends in a place that truly feels like a new beginning.” (ALA Booklist)

“The highlight here is Pack’s personal growth and self-discovery. Give this to readers with a taste for intrigue and quiet, character-driven stories.” (Voice of Youth Advocates (VOYA))