When Wendy Everly was six years old, her mother was convinced she was a monster and tried to kill her. Eleven years later, Wendy discovers her mother might have been right. She's not the person she's always believed herself to be, and her whole life begins to unravel―all because of Finn Holmes. 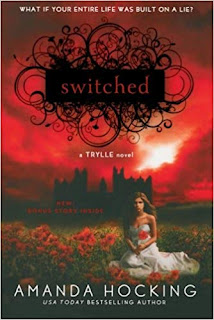 Finn is a mysterious guy who always seems to be watching her. Every encounter leaves her deeply shaken…though it has more to do with her fierce attraction to him than she'd ever admit. But it isn't long before he reveals the truth: Wendy is a changeling who was switched at birth―and he's come to take her home.

Now Wendy's about to journey to a magical world she never knew existed, one that's both beautiful and frightening. And where she must leave her old life behind to discover who she's meant to become…

“Vampire and werewolf lovers beware; this trilogy opener offers readers a new take on an unexpected breed of mystical beings. Readers who can suspend preconceived notions and open themselves up to this new interpretation are in for a midwinter version of a good beach read.” ―Kirkus Reviews

“This is The Princess Diaries meets Twilight, and Hocking hits all the commercial high notes…Switched is escapist fantasy; it isn't the specificity of the world that matters here; it's the accessibility…What teenager hasn't felt like a freak, a changeling in his or her own family? Who doesn't fantasize about being transformed from ordinary to extraordinary, of being whisked way to another life where the very things that are irritants in the "regular world" turn out to reveal our specialness?” ―New York Times Book Review

“Wendy is a flawed antihero, which helps differentiate her from the throng of paranormal-romance heroines, and the potential for development, both dramatic and romantic, should make readers anxious for the next installment of the Trylle trilogy.” ―Booklist

“Switched is written so wonderfully that it is not hard to imagine you are in this fantastic world! Readers will love the exhilarating roller-coaster ride of Wendy's life as she adapts to…a frightening and exciting life.” ―Romantic Times BOOKreviews