The Disappearance of Sloane Sullivan, by Gia Cribbs

August 09, 2018
No one wants me to tell you about the disappearance of Sloane Sullivan. 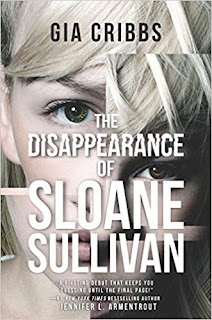 Not the lawyers or the cops. Not her friends or family. Not even the boy who loved her more than anyone. And most certainly not the United States Marshals Service. You know, the people who run the witness protection program or, as it’s officially called, the Witness Security Program? Yeah, the WITSEC folks definitely don’t want me talking to you.

But I don’t care. I have to tell someone.

If I don’t, you’ll never know how completely wrong things can go. How a single decision can change everything. How, when it really comes down to it, you can’t trust anyone. Not even yourself. You have to understand, so it won’t happen to you next. Because you never know when the person sitting next to you isn’t who they claim to be…and because there are worse things than disappearing.

"The Disappearance of Sloane Sullivan is a rollercoaster ride that doesn't stop spinning until the final pages. With complex characters, smartly paced scenes, and a thrilling conclusion, this book has everything I look for in a mystery novel. A riveting and entertaining read." -Paula Stokes, author of Liars, Inc.

"[An] intricately plotted debut thriller... Just when it seems that a resolution is in sight, more surprises build to an explosive, satisfying finale."-Publishers Weekly

"This thriller is high on swoon and red herrings...a satisfying payoff." –Booklist