The Price Guide to the Occult, by Leslye Walton

When Rona Blackburn landed on Anathema Island more than a century ago, her otherworldly skills might have benefited friendlier neighbors. Guilt and fear instead led the island’s original eight settlers to burn “the witch” out of her home. 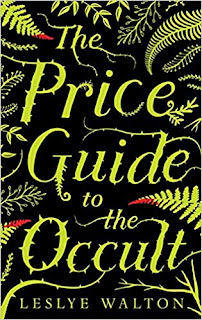 So Rona cursed them.


Fast-forward one hundred–some years: All Nor Blackburn wants is to live an unremarkable teenage life. She has reason to hope: First, her supernatural powers, if they can be called that, are unexceptional. Second, her love life is nonexistent, which means she might escape the other perverse side effect of the matriarch’s backfiring curse, too. But then a mysterious book comes out, promising to cast any spell for the right price. Nor senses a storm coming and is pretty sure she’ll be smack in the eye of it. In her second novel, Leslye Walton spins a dark, mesmerizing tale of a girl stumbling along the path toward self-acceptance and first love, even as the Price Guide’s malevolent author — Nor’s own mother — looms and threatens to strangle any hope for happiness.

Walton conjures a rich sense of place in her sophomore novel, and the backstory of the Blackburn women is undeniably fascinating. Additionally, she does an excellent job handling the topic of Nor’s self-harm: Nor’s already sought treatment by the time her story begins, and though her compulsive thoughts and anxiety are still there, she’s learned how to manage those thoughts in a healthy way...the eerie atmosphere, lyrical language, and romance subplot will still entrance many.  —Booklist

Anathema Island, with its foggy shores, rich diversity of flora and fauna, and quirky tourist shops, comes to vivid life...Nor’s wicked and violent sociopath mother is memorable and her scenes are truly chilling...Walton’s sophomore effort is haunting and, especially in the last act, thrilling.  —School Library Journal

An atmospheric, blood-drenched dark fantasy for a cold and stormy night.  —Kirkus Reviews