The Smoke Thieves, by Sally Green 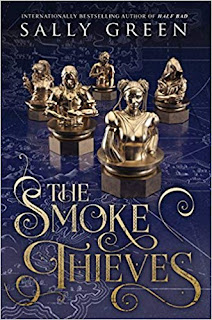 In a land tinged with magic and a bustling trade in an illicit supernatural substance, destiny will intertwine the fates of five players:

A visionary princess determined to forge her own path.

An idealistic solider whose heart is at odds with his duty.

A streetwise hunter tracking the most dangerous prey.

A charming thief with a powerful hidden identity.

A loyal servant on a quest to avenge his kingdom.

Their lives intersect with a stolen bottle of demon smoke. As war approaches, they must navigate a tangled web of political intrigue, shifting alliances, and forbidden love in order to uncover the dangerous truth about the strangely powerful smoke that interwines their fates.

"A YA Game of Thrones that pits power against love, conviction against convention."—Booklist

“Will hold readers rapt until the harrowing conclusion.” —Publishers Weekly

"Love, humor, politics, machinations, loyalty, violence, and magic swirl and shine in this fast-paced book that lovers of this genre will fall into and not want to climb out of." —School Library Connection