The Strange Fascinations of Noah Hypnotik, by David Arnold 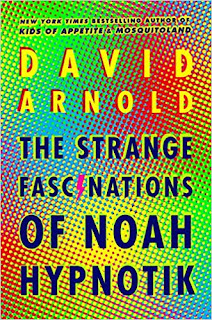 Then Noah → gets hypnotized.

Now Noah → sees changes: his mother has a scar on her face that wasn’t there before; his old dog, who once walked with a limp, is suddenly lithe; his best friend, a lifelong DC Comics disciple, now rotates in the Marvel universe. Subtle behaviors, bits of history, plans for the future—everything in Noah’s world has been rewritten. Everything except his Strange Fascinations . . .

A stunning surrealist portrait, The Strange Fascinations of Noah Hypnotik is a story about all the ways we hurt our friends without knowing it, and all the ways they stick around to save us.


★ "Arnold has written an in-your-face validation of the power of real and honest friendship, guaranteed to mesmerize readers and leave them altered." —Booklist, starred review

★ "This is a comedic coming-of-age tale with plenty of pop culture and literary references and the snarky, casual, and observational feel of a mumblecore comedy. Supporting characters are fully fleshed out and hilarious. A weird, compelling teen-angst trip that will appeal to fans of John Corey Whaley." —School Library Journal, starred review

"Shivery and vaguely psychedelic . . . This is the kind of book that will appeal strongly to teenagers like Noah who are just starting to think about what they want from their futures, but it’s also immensely enjoyable to read as an adult. It’s a funny, eerie, beautifully textured book, a strange fascination in and of itself." —Vox