For two and a half years, Subject 684 "Jane Doe" has been locked underground in a secret government facility, enduring tests and torture. In that time, she hasn't uttered a single word. Not even her real name. 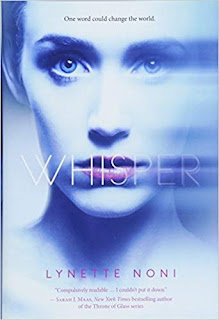 Jane chooses to remain silent rather than risk losing control over the power within her. She alone knows what havoc her words can cause.   Then the authorities put her in the care of the mysterious Landon Ward, and Jane is surprised when he treats her like a person rather than a prisoner. Ward's protective nature causes her resolve to crack in spite of her best efforts to resist. Just as Jane begins to trust him, though, a freak accident reveals the dangerous power she has concealed for years. It also reveals that the government has been keeping secrets of its own. Now Jane’s ability is at the heart of a sinister plot for vengeance, and she has to decide whom she will trust ... and whom she will help.   Well-known throughout her native Australia, Lynette Noni creates compelling stories that appeal to devoted fantasy fans and general-interest readers alike. This novel's extended metaphor about finding and controlling one's voice and power will resonate with teens attempting to do just that. The slow-simmering romance, richly imagined world and unexpected plot twists will hook readers from the very first page.


A fast science fiction read that will appeal to avid fans and is filled with twists, betrayals, and an unexpectedly cheesy villain.—Jen McConnel, Queen's University, Ont.