Attack of the 50 Foot Wallflower, by Christian Heidicker

Phoebe Lane is a lightning rod for monsters. 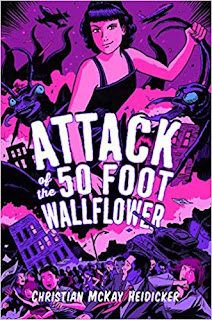 She and her mom are forced to flee flesh-eating plants, blobs from outer space, and radioactive ants. They survive thanks to Phoebe’s dad—an invisible titan, whose giant eyes warn them where the next monster attack will take place.

All Phoebe wants is to stop running from motel to motel and start living a monster-free life in New York or Paris. But when her mom mysteriously vanishes, Phoebe is left to fend for herself in small-town Pennybrooke.

That's when Phoebe starts to transform…

"This is a wonderful and wholly unique entry in teen horror fiction." (School Library Journal)

"Phoebe is a plucky, snarky heroine, and her fantastic adventure will entertain teens." (Kirkus Reviews)