Crossing the Line, by Simone Elkeles 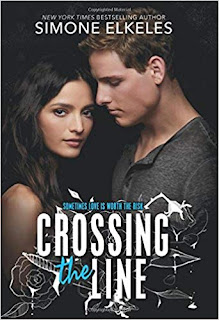 But his plans to keep his head down and stay out of trouble are shattered the minute he meets the beautiful and totally out of his league Dalila Sandoval.


Dalila Sandoval shouldn’t even know someone like Ryan Hess. The daughter of one of the wealthiest lawyers in Mexico, Dalila is focused on studying and planning for her bright future. Ryan is only a distraction from her dreams, but she’s never felt more alive than when she’s by his side.


Ryan and Dalila are wrong for each other in every way. And yet they can’t resist the sparks that fly when they’re together. But their love is like a flame burning too close to the fuse.


Something is going to explode. Will their love be strong enough to survive? Or will it burn them both?

“[A] sensational tale of romance, deception, and the border between Texas and Mexico. Hand this title to fans of Elkeles’s previous works and teens seeking a suspenseful, steamy romance.” (Voice of Youth Advocates (VOYA))