Up-It's been a tight-knit group of four teens-Abby, Cooper, Rachel, and Justin-for many years. But this summer, Rachel and Justin will be away, and Abby and her handsome best friend Cooper are keeping each other company when they're not working and volunteering. 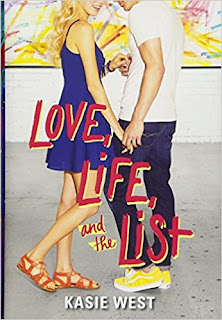 Abby has a tremendous unrequited crush on Cooper and was rejected romantically last year when she declared her love, but is realizing that hanging out constantly and not wanting to lose him as a friend is increasingly difficult, given her deep feelings.

She's also handling several stressful situations at home: trying to manage her mom's increasing anxiety while her dad is away serving in the military, and striving to improve her artwork which has been judged as having no heart. Abby decides to create a list of ways to challenge herself and help open her horizons, which should theoretically improve her painting skills.

Does she have to distance herself from Cooper in order to move on?


“The list is a clever plot device to drive the story forward, and it offers surprises along the way. Readers will be touched by West's handling of the mother-daughter relationship, especially given Abby's mom's anxiety and agoraphobia, while the list, of course, tells all of us a thing or two about busting up routines and grabbing unexpected returns.”  --  Booklist