In a world dominated by the brutal Vathek empire, eighteen-year-old Amani is a dreamer. 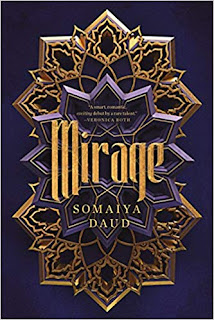 She dreams of what life was like before the occupation; she dreams of writing poetry like the old-world poems she adores; she dreams of receiving a sign from Dihya that one day, she, too, will have adventure, and travel beyond her isolated home.


But when adventure comes for Amani, it is not what she expects: she is kidnapped by the regime and taken in secret to the royal palace, where she discovers that she is nearly identical to the cruel half-Vathek Princess Maram. The princess is so hated by her conquered people that she requires a body double, someone to appear in public as Maram, ready to die in her place.


As Amani is forced into her new role, she can’t help but enjoy the palace’s beauty―and her time with the princess’ fiancé, Idris. But the glitter of the royal court belies a world of violence and fear. If Amani ever wishes to see her family again, she must play the princess to perfection...because one wrong move could lead to her death.

“Superb...a refreshing and unique coming-of-age story. The way Amani uses her heritage to facilitate her survival makes Mirage a beautiful and necessary meditation on finding strength in one’s culture.” ―Entertainment Weekly, Top Pick of the Month


“Daud’s debut novel has the flair of an Arthurian drama, the lavish sensory detail of a Nizar Qabbani poem, and the sleek technical flair of a sci-fi series...this audacious combination is so skillfully done that it’ll shock breath into your lungs. If you loved The Wrath and the Dawn and Children of Blood and Bone, Mirage will captivate you.” ―The Christian Science Monitor


“This poetically written novel will appeal to many, particularly fans of Cinder by Marissa Meyer and An Ember in the Ashes by Sabaa Tahir.” ―School Library Journal, starred review