Monday's Not Coming, by Tiffany Jackson

Monday Charles is missing, and only Claudia seems to notice. 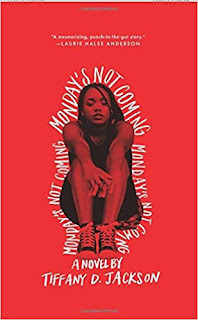 Claudia and Monday have always been inseparable—more sisters than friends. So when Monday doesn’t turn up for the first day of school, Claudia’s worried.

When she doesn’t show for the second day, or second week, Claudia knows that something is wrong. Monday wouldn’t just leave her to endure tests and bullies alone. Not after last year’s rumors and not with her grades on the line. Now Claudia needs her best—and only—friend more than ever. But Monday’s mother refuses to give Claudia a straight answer, and Monday’s sister April is even less help.

As Claudia digs deeper into her friend’s disappearance, she discovers that no one seems to remember the last time they saw Monday. How can a teenage girl just vanish without anyone noticing that she’s gone?

“This thought-provoking thriller examines issues such as abuse, gentrification, and the marginalization of people of color with nuance and sensitivity. The narrative deftly moves back and forth between past and present, building to a devastating conclusion.” (School Library Journal (starred review))

“Jackson effortlessly weaves elements of suspense with issues of race, class, and gender, casting a harsh light on a world that often refuses to notice the disappearances of black and brown girls. The twist at the end is both gaspworthy and heartbreaking.” (Bulletin of the Center for Children’s Books (starred review))

“Jackson doesn’t hold anything back when it comes to the pain of abuse and the ramifications of turning a blind eye. It’s a frank, devastating read filled with real and flawed characters, and it’s a story that needs to be read.” (Booklist)