Cager has been transported to the Tennessee, a giant lunar-cruise ship orbiting the moon that his dad owns, by Billy and Rowan to help him shake his Woz addiction. 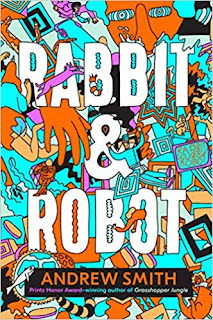 Meanwhile, Earth, in the midst of thirty simultaneous wars, burns to ash beneath them. And as the robots on board become increasingly insane and cannibalistic, and the Earth becomes a toxic wasteland, the boys have to wonder if they’ll be stranded alone in space forever.

In his new novel, Andrew Smith, Printz Honor author of Grasshopper Jungle, will make you laugh, cry, and consider what it really means to be human.

"Smith has woven an unpredictable, gross, and prescient rumination on modernity, media consumption, and machine-aided communication... Those delving into Smith's zany dystopia will find much to laugh and gasp at, including comedia and serious musings upon sex and violence. But most of all, they will find many deep, essential questions worth pondering." (Booklist starred review)