Kenzie holds one truth above all: the company is everything. 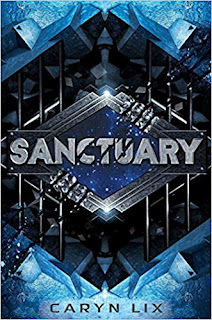 As a citizen of Omnistellar Concepts, the most powerful corporation in the solar system, Kenzie has trained her entire life for one goal: to become an elite guard on Sanctuary, Omnistellar’s space prison for superpowered teens too dangerous for Earth. As a junior guard, she’s excited to prove herself to her company—and that means sacrificing anything that won’t propel her forward.

But then a routine drill goes sideways and Kenzie is taken hostage by rioting prisoners.

At first, she’s confident her commanding officer—who also happens to be her mother—will stop at nothing to secure her freedom. Yet it soon becomes clear that her mother is more concerned with sticking to Omnistellar protocol than she is with getting Kenzie out safely.

As Kenzie forms her own plan to escape, she doesn’t realize there’s a more sinister threat looming, something ancient and evil that has clawed its way into Sanctuary from the vacuum of space. And Kenzie might have to team up with her captors to survive—all while beginning to suspect there’s a darker side to the Omnistellar she knows.

“Caryn Lix takes the prison thriller genre to new places in this YA novel.”  (Quill & Quire)

This sci-fi fantasy is filled with YA characters having to determine what is right and face serious consequences for whatever they decide. Lix’s novel keeps teens guessing what is really going on and who will win this epic space battle. The ending will leave readers hoping for a sequel.–Jessica Perovich, US Court of Appeals, Federal Circuit Library (School Library Journal May 1, 2018)

There’s an enjoyable B-movie vibe to the plotting, as Kenzie outmaneuvers monsters, discovers her own technologically repressed superpower, learns the tightly circumscribed boundary of her mother’s love, and kindles a romance with the Sanctuary prisoner leader, all within the time- frame of a couple of days. The themes and characters may derive from familiar sci-fi repertoire, but Lix’s breakneck pacing keeps the pages flying, and Kenzie’s barely tapped superpower and the unplumbed depths of Omnistellar’s presence provide plenty of scope for later adventure. Lix leaves readers just where she wants them: satisfied by a complete story arc but ready to follow the surviving renegades into space, with good guys and bad guys undoubtedly in hot pursuit.  (BCCB June 2018)