The Traitor's Ruin, by Erin Beaty


A captain with a secret.
A spy with a mission.
A kingdom on the verge of ruin. 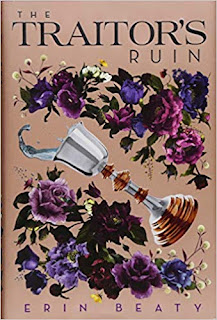 After proving her worth as a deft spy and strategic matchmaker, Sage Fowler is now comfortably positioned in high society as the royal tutor. When she learns of a secret mission, she jumps at the chance to serve her kingdom once more―and to be reunited with her fiancé, Captain Alex Quinn.


However, Sage’s headstrong insistence clashes with Alex’s gruff military exterior. And after a skirmish with a bordering kingdom, they're separated when tragedy strikes. Now in enemy territory, Sage desperately scrambles to complete Alex’s reconnaissance mission. Can she save her kingdom once more?