Nova’s double life is about to get a lot more complicated: 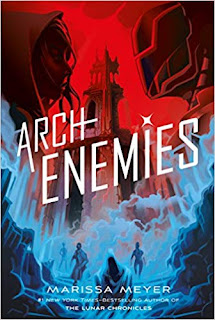 As Insomnia, she is a full-fledged member of the Renegades, a syndicate of powerful and beloved superheroes. She works with Adrian’s patrol unit to protect the weak and maintain order in Gatlon City.

As Nightmare, she is an Anarchist - a group of villains who are determined to destroy the Renegades. Nova wants vengeance against the so-called heroes who once failed her when she needed them most.
But as Nova, her feelings for Adrian are deepening, despite the fact that he is the son of her sworn enemies and, unbeknownst to Nova, he has some dangerous secrets of his own.

Nova, Adrian, and the rest of their crew – Ruby, Oscar, and Danna -- are faced with escalating crime in Gatlon City, while covert weapons and conflicting missions have Nova and Adrian questioning not only their beliefs about justice, but also the feelings they have for each other.

The line between good and evil has been blurred, but what's clear to them both is that too much power could mean the end of their city – and the world – as they know it.

"Meyer is fantastic with superpowers, and the best moments in the book involve ingenious or breathtaking displays of ability, as well as entertaining hints of a centuries-long prodigy history."--Publishers Weekly

"Adrian and Nova, two teen superheroes, have a lot in common: a problematic hidden identity, a secret plan to avenge a family member’s death, and a growing attraction to each other that is impossible to indulge simply because of who they are. ...This enticing mix of superhero adventures and budding love story also tackles hefty ethical issues, and Meyer masterfully manipulates plot and characters to send readers racing for the last page and regret reaching it, especially when they're met by its suspenseful cliff-hanger.”--Booklist