Girls on the Line, by Jennie Liu 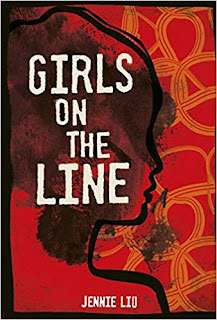 Luli has just turned sixteen and finally aged out of the orphanage where she's spent the last eight years. Her friend Yun has promised to help her get work. Yun loves the independence that her factory job brings her. For the first time in her life she has her own money and can get the things she wants: nice clothes, a cell phone...and Yong, her new boyfriend. There are rumors about Yong, though. Some people say he's a bride trafficker: romancing young women only to kidnap them and sell them off to bachelors in the countryside. Yun doesn't believe it. But then she discovers she's pregnant the same day she gets fired from her job. If she can't scrape together enough money to terminate the pregnancy, she'll face a huge fine for having an unauthorized child. Luli wants to help her friend, but she's worried about what Yong might do...especially when Yun disappears.


“Told in the first person from the two girls' alternating points of view, readers will be drawn into their emotional lives through sharing both their quiet, day-to-day routines and the moments of high drama, all of which are direct results of policies that trapped ordinary citizens and forced them into making terrible decisions. An affecting and original thrill ride highlighting the bond between two friends put in a horrible situation by actual Chinese government policies."--Kirkus Reviews


"Liu shifts narration creatively along plot points and uses a matter-of-fact tone to immerse readers in the unfolding action. The characters are realistic products of their experiences--they are flawed, accessible, and multidimensional. This novel explores a moment of contemporary history and a culture that is underrepresented in YA realistic fiction."--starred, School Library Journal