The Giant, by Lex Thomas


In the violent early days of the quarantine, Gonzalo joins a gang of thieves who live in the ductwork of McKinley High School. 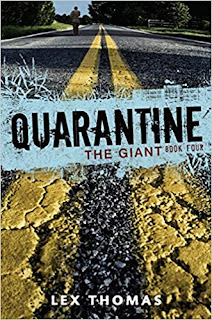 There he falls in love with Sasha, but as he grows too big to fit, he is forced to leave without her.

A year later, he scours the infected zone for her. No matter how many murderers, puncture wounds, or militia he has to survive, Gonzalo can't give up on Sasha.

In the fourth installment of the Quarantine series, Lex Thomas delivers two intertwined stories about love and longing, which merge in a conclusion where the fate of the entire infected zone hangs in the balance.

" This edgy, explicit novel isn't as hard-hitting or fast-paced as its predecessors, but it's a solid choice for mature readers seeking morally ambivalent, lawless dystopias."--Booklist Online