Black Enough: Stories of Being Young & Black in America, edited by Ibi Zoboi 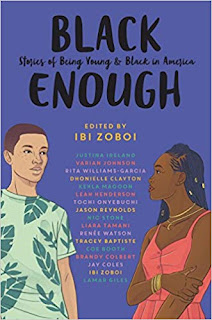 Black is...sisters navigating their relationship at summer camp in Portland, Oregon, as written by Renée Watson.


Black is…three friends walking back from the community pool talking about nothing and everything, in a story by Jason Reynolds.


Black is urban and rural, wealthy and poor, mixed race, immigrants, and more—because there are countless ways to be Black enough.

★ “Each entry is deftly woven and full of such complex humanity that teens will identify with and see some of their own struggles in these characters... This collection presents the beauty of black humanity in all its many forms.” (School Library Journal (starred review))