When Sybella accompanies the Duchess to France, she expects trouble, but she isn’t expecting a deadly trap. 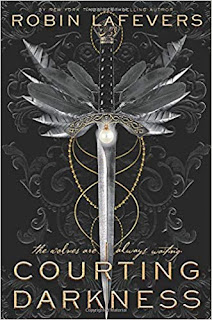 Surrounded by enemies both known and unknown, Sybella searches for the undercover assassins from the convent of St. Mortain who were placed in the French court years ago.

Genevieve has been undercover for so many years, she no longer knows who she is or what she’s supposed to be fighting for. When she discovers a hidden prisoner who may be of importance, she takes matters into her own hands.

As these two worlds collide, the fate of the Duchess, Brittany, and everything Sybella and Genevieve have come to love hangs in the balance.

"Sharp and breathless, full of anger and strength. May the sequel hurry."--Kirkus, starred review

"LaFevers yet again skillfully pulls from the history of the 15th century French-Breton War to create a richly developed world of political intrigue, while casting it with deeply relatable and fully fleshed out characters."--The Bulletin of the Center for Children's Books