The Seven Torments of Amy and Craig, by Don Zolidis


The worst thing that's ever happened to Craig is also the best: Amy. 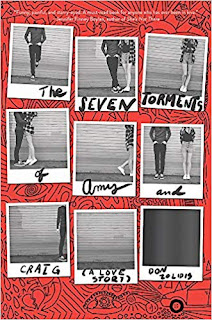 Amy and Craig never should've gotten together. Craig is an awkward, Dungeons & Dragons-playing geek, and Amy is the beautiful, fiercely intelligent student-body president of their high school.

Unfolding during their senior year, Amy and Craig's exhilarating, tumultuous relationship is a kaleidoscope of joy, pain, and laughter as an uncertain future-and adult responsibility-loom on the horizon.

Craig fights for his dream of escaping Janesville and finding his place at a quirky college, while Amy's quest to uncover her true self sometimes involves being Craig's girlfriend and sometimes doesn't.