For Nari, aka Narioka Diane, aka hacker digital alter ego "d0l0s," it's college and then a career at "one of the big ones," like Google or Apple. 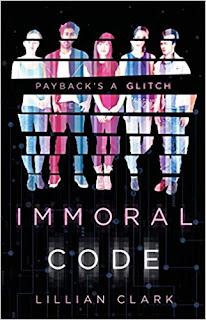 Keagan, her sweet, sensitive boyfriend, is happy to follow her wherever she may lead. Reese is an ace/aro visual artist with plans to travel the world. Santiago is off to Stanford on a diving scholarship, with very real Olympic hopes. And Bellamy? Physics genius Bellamy is admitted to MIT--but the student loan she'd been counting on is denied when it turns out her estranged father--one Robert Foster--is loaded.
Nari isn't about to let her friend's dreams be squashed by a deadbeat billionaire, so she hatches a plan to steal just enough from Foster to allow Bellamy to achieve her goals. Fast-paced and banter-filled, Lillian Clark's debut is a hilarious and thought-provoking Robin Hood story for the 21st century.

"A smart and fast-paced debut that will intrigue heist aficionados and modern-minded Robin Hoods."--Booklist