The Greatest Treasure Hunt in History: The Story of the Monuments Men, by Robert Edsel


As the most destructive war in history ravaged Europe, many of the world's most cherished cultural objects were in harm's way. 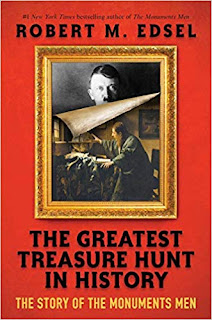 The Greatest Treasure Hunt in History recounts the astonishing true story of 11 men and one woman who risked their lives amidst the bloodshed of World War II to preserve churches, libraries, monuments, and works of art that for centuries defined the heritage of Western civilization. As the war raged, these American and British volunteers -- museum curators, art scholars and educators, architects, archivists, and artists, known as the Monuments Men -- found themselves in a desperate race against time to locate and save the many priceless treasures and works of art stolen by Adolf Hitler and the Nazis.

Give Back to Your Community &  Get Valuable Job Experience!

TEEN ADVISORY GROUP Are you interested in volunteering at the library? Join our Teen Advisory Group to find out how to get involved and meet other teen volunteers!
WHEN: Feb 9th at 3pm. (We meet monthly) WHERE: Blue Room TEEN STUDY HALL Need a place to study? Come to the Visalia Branch Library's Homework Center, where we have free wifi, free printing, access to Window 10 laptops, and best of all a distraction-free zone!

WHEN: Tuesdays-Thursday from 3pm-6pm
WHERE: Homework Center

Watch and discuss Belle, a film based on the true story of Dido Elizabeth Belle, the daughter of an English Admiral and a slave, and the landmark case that ended up turning the tide against the slave trade.

WHEN: Feb 9th from 12-3pm
WHERE: Homework Center