The Music of What Happens, by Bill Konigsberg 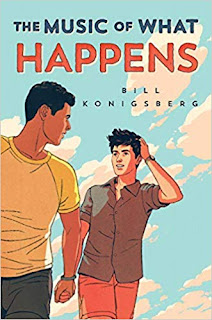 And a secret: An encounter with an older kid that makes it hard to breathe, one that he doesn't want to think about, ever.

Jordan: The opposite of chill. Poetry. His "wives" and the Chandler Mall. Never been kissed and searching for Mr. Right, who probably won't like him anyway. And a secret: A spiraling out of control mother, and the knowledge that he's the only one who can keep the family from falling apart.

Throw in a rickety, 1980s-era food truck called Coq Au Vinny. Add in prickly pears, cloud eggs, and a murky idea of what's considered locally sourced and organic. Place it all in Mesa, Arizona, in June, where the temp regularly hits 114. And top it off with a touch of undeniable chemistry between utter opposites.

Over the course of one summer, two boys will have to face their biggest fears and decide what they're willing to risk -- to get the thing they want the most.

* "Konigsberg demonstrates once again why he is one of the major voices in LGBTQ literature." -- Booklist, starred review

"The result is a story with imperfect characters who are, refreshingly, called out on problematic behaviors and aim to do better. A fresh addition to the menu of queer teenage love stories." -- Kirkus Reviews