Only a Breath Apart, by Katie McGarry


They say your destiny is carved in stone. But some destinies are meant to be broken. 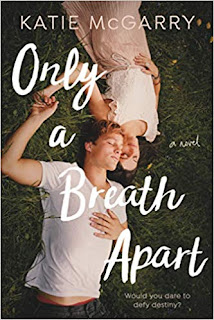 The only curse Jesse Lachlin believes in is his grandmother’s will: in order to inherit his family farm he must win the approval of his childhood best friend, the girl he froze out his freshman year.


A fortuneteller tells Scarlett she's psychic, but what is real is Scarlett’s father’s controlling attitude and the dark secrets at home. She may be able to escape, but only if she can rely on the one boy who broke her heart.


Each midnight meeting pushes Jesse and Scarlett to confront their secrets and their feelings, but as love blooms, the curse rears its ugly head…

“Beyond a haunted teen romance is a beautiful, moving exploration of domestic violence, forgiveness, and self-love. ...Simultaneously heartbreaking and heartwarming.” ―Kirkus, starred review


“McGarry ably captures the feeling of desperately wanting to come home to a friendship that has radically changed. The novel manages to tackle domestic violence in a way that never feels clichéd, and the romance is sure to win over even the most cynical reader. This is a story you’ll want to read slowly, just to be able to stay with the characters for a moment longer.”―Booklist