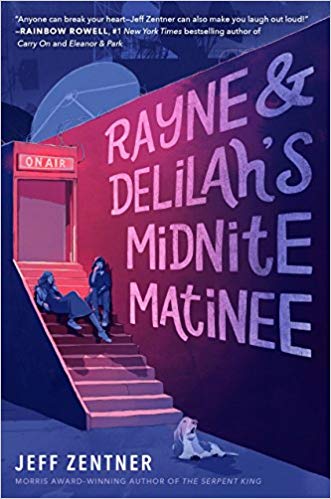 But with the end of senior year quickly approaching, the girls face tough decisions about their futures. Josie has been dreading graduation, as she tries to decide whether to leave for a big university and chase her dream career in mainstream TV. And Lawson, one of the show's guest performers, a talented MMA fighter with weaknesses for pancakes, fantasy novels, and Josie, is making her tough decision even harder.

Scary movies are the last connection Delia has to her dad, who abandoned the family years ago. If Midnite Matinee becomes a hit, maybe he'll see it and want to be a part of her life again. And maybe Josie will stay with the show instead of leaving her behind, too.

As the tug-of-war between growing up and growing apart tests the bonds of their friendship, Josie and Delia start to realize that an uncertain future can be both monstrous...and momentous.

"As in his award-winning The Serpent King (2016), Zentner packs a poignantly satisfying blend of wit and pathos, with lovable and unpredictable characters. . . . Readers looking for an unforgettable slice of small-town angst will love this one." --Starred Review, Booklist

"Zentner nails his teen characters, their longings, and their motivations, and the first chapters are downright hilarious." --Kirkus Reviews